It was at the end of the first performance of my opera Peter Pan by the Théâtre du Châtelet in Paris that Damien Ventula asked me to write a piece for a cello solo in readiness for a first performance in Berlin. Undoubtedly still influenced by three years work on a complex lyrical piece, I composed a work for soloist of very wide proportions which gives an overview of most of the musical dimensions of the instrument as well as expressing a wide theatrical scope.

The clarity and amplitude in Damien Ventula’s use of sound, immediately gave me the idea of opening the piece with an incandescent exordium which leads up to a lively and spirited bacchanalia. For the anecdote, the exordium’s V shaped waves give a knowing wink to the first letter common to the creator of the work and his instrument (Violoncelle – cello in french). Indeed, what seems at first glance to be merely a set of graphics, in fact prompts the driving force of the whole piece: 3 half-tones and a third minor. In a second more dreamlike idea, the tremolos entwine in half-tones and third minor before hurtling into the bacchanalia where the different featured elements are developed in lively fashion.

The second movement is a slow expressive meditation which first of all lets the instrument warble, then prepares in an anxious mood, the material which is to follow: half-tone – fourth.

In the third movement, the cello demonstrates a wide range of percussive sounds inspired by the Korean pansori (traditional opera) and the rippling sounds of the komungo (kind of zither). But here the musician must take on both parts: the voice which recites (or the komungo) and the drum which comments and shapes the musical discourse by rhythmic modes.

The main sounds of this singular pansori are the pizzicati and the tapping on the top and the fingerboard of the instrument.

The cello gradually reaches a higher and higher pitch, the bow takes over from the pizzicato with increasing intensity and finishes in a mad dash to a frenzied finale in the shape of a tarantella.

This very virtuoso last movement contains a calmer central sequence with a development based uniquely on natural harmonic sounds.

And finally concludes with a return to the initial cry but with a heightened tension, as the cello « cries out » in rage with a piercing D flat in what is obviously no longer an exordium, but perhaps, after this twenty minute piece of music, a release. 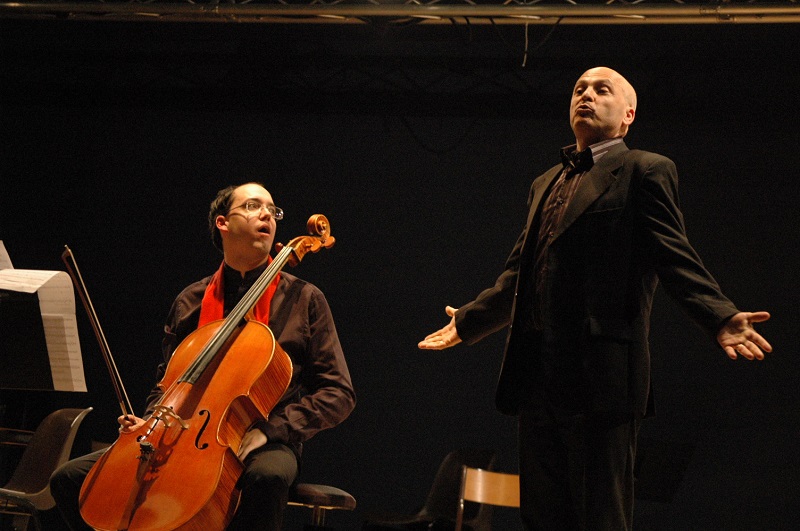 Damien Ventula and Patrick Burgan, during a public session about “FEUX”