To get the scores, send an email to the association Alcmène : Contact

And so begins the Stabat Mater of the Nativity where the poetic structure is strictly identical to that of the Stabat Mater dolorosa in the Passion of Christ; here the Mother is standing, radiant, by the manger.

A hymn in Latin is the foundation of this work of about 21 uninterrupted minutes, for a mixed choir of 24 voices a cappella, superposed by five other texts from the 15th and the 20th centuries sung in Italian, Spanish, English and German; these are profane texts this time but united on one and only theme: the miracle of the birth of a child.

And so with a range of 6 voices from sopranos to basses, each sing a different language:

Giovanni Dominici (15th century) depicts Mary as a very «motherhen» figure in his poem. The young mother is unable to look away from her baby on the hay in the manger. She is aware of the great destiny of her darling son, but it is implicit, clearly obvious, how much she would prefer to keep him always close to her! She suffers as any mother would, from the separation of the flesh. She is very humane.

Angela Figuera’s song in verse (20th century) is a veritable litany. In just a few stanzas, it lists all the wonders linked to the birth of a man,  a skillful progression with hints of  dreamlike – even surrealist images – but culminating in  the most  touching simplicity. « When a man comes into the world we all have a brother. »

Keystone of the work, the «Stabat Mater speciosa» (anonymous, 13th century?), closely modelled on the rhyme in the «Stabat Mater dolorosa» of the Passion, opens and closes « Nativities ». The descending movement of the final Amen leads back of course to the opening movement, this time ascending, as the Mother stands by the manger.

In sublimely lyrical verse, Milton (17th century) describes a frozen and wild winter, a compassionate nature where the wind, the birds and the ocean contemplate the arrival of the « Prince of Light ». The stars, eyes wide open, are deaf to the pleas of Lucifer, the shamefaced sun is witness to the birth of an even greater Sun; the talkative shepherds seem overwhelmed by the happening, in the air there are divine echos… And still the cristal symphonies ring out over the booming of the heavenly organ; songs of praise which gently hush as the Blessed Virgin lays down her baby.

Alfred de Vigny (19th century) doesn’t really stage a dream, but more an ultimate reminiscence of the world that a newborn child has just left behind. The angels (his former playmates) gather around him, focusing on the wonders he has left behind and the plight of his new condition. In fact the cherubs are envious of the little man as from henceforth he has a mother.

This hymn to the night, so pre-romantic was written by Andreas Gryphius (17th century). The soft melody of the few verses immerses us in a rapturous mood of peacefulness; in the serene beauty of that Night, which, two thousand years ago, was lighter than the day,  more dazzling than the sun.

Once the texts had been chosen and set out – thus creating the script of this profane-sacred fresco – the challenge remained to give a theatrical and musical sense to a seemingly arbitrary and non-sensical literary juxtaposition. Indeed the musical score came into being through the comparison of these texts giving rise to different situations.

In the opening scene, all are present to introduce the action: the range of the 24 voices of the choir gradually open out into a counterpoint of an essentially diatonic clarity.

A more explicit prayer follows where each of the voices takes turns to lead in a modal polyphony of 4, then 6 voices. Next the sopranos and finally the solo coloratura conclude to sing the fulfilled mother’s joy in very smooth, melodic harmony.

Cries from the newborn child, uncontrollable pain of such acute maternal happiness, anxiety at the thought of the inevitable separation, thundering fanfares of the heavenly bodies, all elements which unleash a central section in a very complex chromatic counterpoint where the voice filaments in total disarray, build up to the vibrant climax of the piece.

Calm returns with the evocation of the death of the body, an absolute certainty from birth but quickly sublimated by a message of love and hope; here the musical content forges a synthesis between the diaphanic diatonism at the beginning and the chromatic profusion in the central section.

Often the « Ave Maria » and the « Ave maris stella » blend with the « Puer natus est » gregorian chant (as much as in the rhythm as in the melody) which is the musical cement of this multi-lingual mosaic.

After Stabat Mater for mixed choir a cappella (1996), then Audi Coelum for tenor,  2 sopranos, mixed choir and organ ( 1998 ), these Nativities ( 2005 ) come to close the Marian triptych intended for the chamber choir Les Eléments of Joël Suhubiette
Patrick Burgan 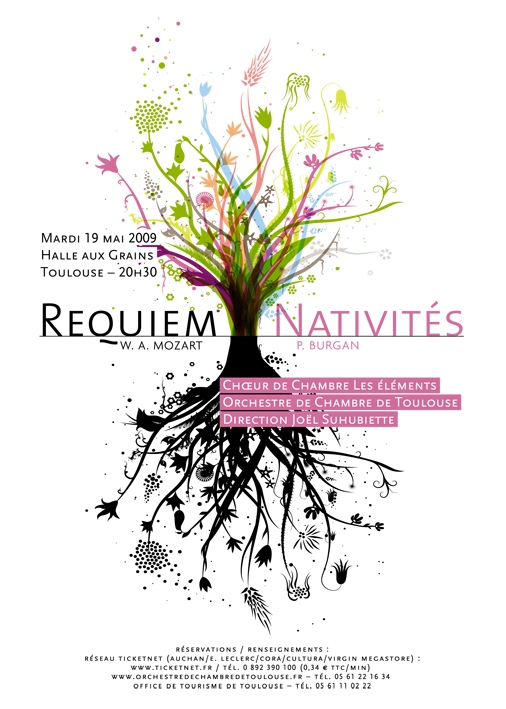